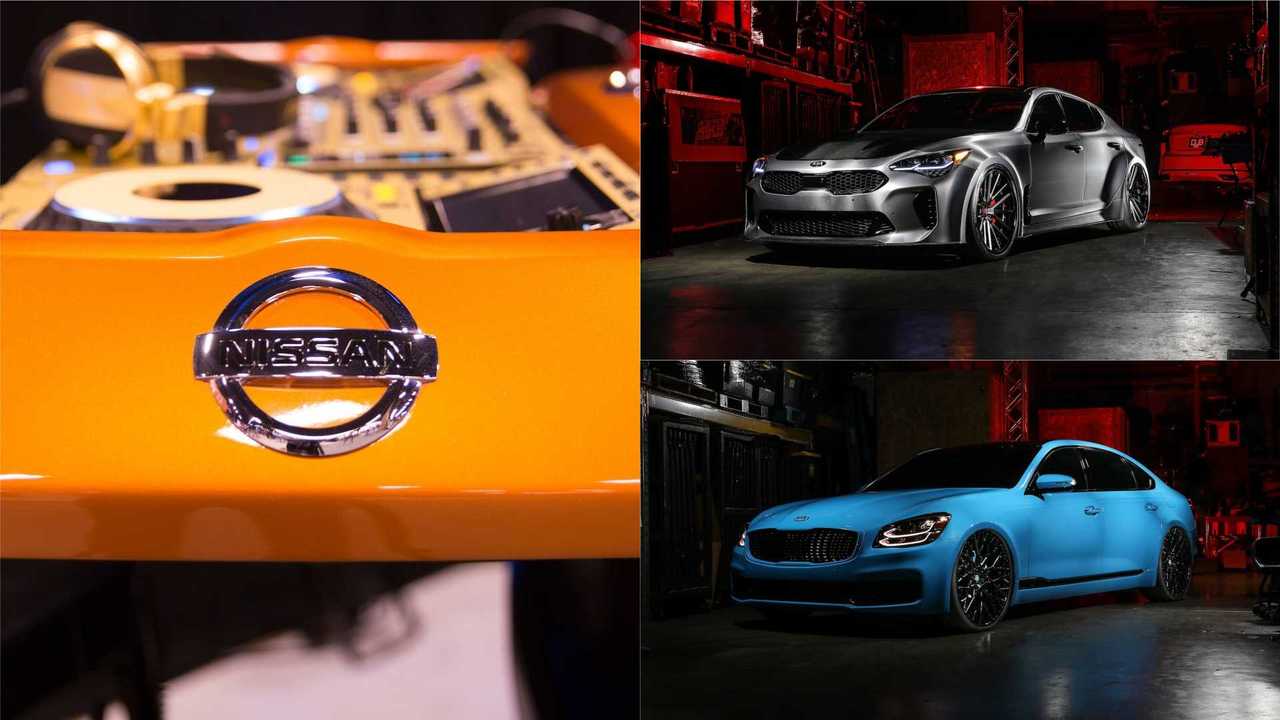 The baker’s dozen of bad but still kind of rad SEMA show cars.

For every crazy, cool car on display at SEMA, there’s an equally tacky equivalent parked somewhere within the halls of the Las Vegas convention center. Some of these vehicles are downright gaudy, while others are simply conceptually questionable. (Count last year’s Chevrolet Traverse SUP concept among the latter vehicles that made us look up to the heavens and ask “Why?”) No matter, these are the cars and trucks we deemed the worst offenders of the 2018 SEMA show. Read on to find out which vehicles took home this uncoveted prize.

It’s not that we don’t like the Acura RDX Graham Rahal Performance, it’s simply that we expect a bit more outlandishness from SEMA show cars. That said, we wholeheartedly hope Acura considers bringing this 345-horsepower variant of its RDX crossover SUV to the masses as a formal challenger to the likes of the BMW X3 M40i and Mercedes-AMG GLC43. Leave the wacky graphics behind, though.

The DUB Kia Stinger GT is as ostentatious as the SEMA show – and that’s not a good thing. Where other tuners might eke extra performance from the sedan’s 365-horsepower twin-turbocharged 3.3-liter V6, DUB instead chose to bless the Stinger with obnoxious style.

Along with a wide-body kit, the silver sedan also includes big 22-inch wheels and tires, an air suspension system, and a tacky engine dress-up kit. At least there’s an aftermarket air intake and exhaust system to add a few extra horses, however, we doubt the additional power is enough to offset the extra weight of the air suspension kit and massive wheels and tires. We’re sure there’s someone out there who likes the DUB Stinger GT; it’s just not us.

DUB also left its mark on the all-new Kia K900 luxury sedan, with the company gracing Kia’s flagship model with a coat of electric blue paint and massive 24-inch wheels. Air suspension, of course, is also part of the package. The complete product is gaudy and over-the-top. In short, it's everything we love to hate about SEMA.

We’ll be honest: the Kevin Costner Toyota Tundra is pretty awesome. That said, we don’t get the tie-in with the actor. Sure, we understand that Costner uses the truck to camp and reach remote filming locations, but couldn’t Toyota’s marketing department have come up with a more compelling name for this special truck?

It’s not that the Kia Forte drift car isn’t cool, it’s simply that its existence seems to make no sense. Red Bull and Race Service rejiggered the front-wheel-drive four-cylinder compact sedan to send power to the rear wheels by way of a twin-turbocharged 3.3-liter V6 engine. Sounds cool, right? Well, it might be, if not for the fact the rear-wheel-drive, 365-horsepower Stinger GT already exists. Ultimately, the Forte drift car seems like a missed opportunity, as Kia would have been wise to capitalize on the Stinger GT’s communicative and capable chassis.

Yep, Nissan turned its Kicks subcompact crossover SUV into a DJ booth. It’s tacky and tasteless and, quite simply, not our cup of tea. Still, there’s surely some Zedd wannabe who sees something worthwhile out of this orange box, and if the Kicks Sound Machine helps push one more vehicle off of a Nissan dealership lot, then this show car will have proven its worth.