All 18 Of Ken Block’s Crazy Cars And Trucks, Ranked

The Block STyle Ford Focus ST doesn’t have the same shouty personality as other cars on this list, but with unique styling and a limited production run, it can’t be overlooked. It’s one of just three examples styled by Fifteen52 as part of the Project ST program in 2012.

Unlike the other cars on this list, this entrant is surprisingly tame. Ken Block’s latest daily is a lightly modified 2016 Ford Focus RS. Apart from the wheels (a set of Fifteen52 forged monoblock turbomacs), the only upgrade to the RS is an ST suspension coilover setup. Otherwise, the factory turbocharged 2.3-liter four-cylinder engine still produces 350 horsepower and 350 pound-feet of torque.

When the Ford Focus isn’t big enough, Ken Block pulls out his modded F-150 Raptor pickup. Like the RS, this truck is pretty tame relative to the other cars on this list. Still, it sports upgrades like a long-travel suspension, Fifteen52 forged two-piece Turbomac HD wheels and Toyo Open Country tires.

This Ford Fiesta RS may not have the same prestige as the other Fiestas on this list  (particularly those used in Gymkhana), but keen minds will recall that this was M-Sport’s first global rally car. And interestingly enough, it was driven by Ken Block's wife, Lucy Block. Powered by a 1.0-liter three-cylinder engine, the peppy hatchback produces 177 horsepower and comes paired to a five-speed sequential gearbox. It may not be the most recognizable car on this list, but it definitely plays an important history in the Block racing lineage.

When Block isn’t beating up his rally cars, he needs a big truck to haul his toys. This 2017 Ford Super Duty F-450 Lariat ought to do the job. With 22-inch tractor-trailer wheels wrapped in Toyo tires, an all-black-everything exterior, and a factory diesel-drinking, turbocharged 6.7-liter V8 PowerStroke engine, this is one badass truck.

Built for Gymkhana 2, this 2009 Subaru Impreza WRX STI rally car wields a turbocharged four-cylinder engine good for 566 horsepower at the wheels and 611 pound-feet of torque. It wasn’t dramatically different from the same STI from 2006 (which you’ll see in a bit), but it was one of Block’s most iconic rally cars.

After the success of the first two Gymkhana videos, Ken Block and his team rolled out this retro-inspired Ford Fiesta that’s filled to the brim with performance goodies. Powered by an Olsbergs 2.0-liter Duratec engine, the Fiesta produces 600 horsepower and 660 pound-feet of torque, which it puts to the ground by way of a six-speed sequential gearbox and an all-wheel-drive system. Its livery changed multiple times in the years that followed, but in 2015 – ahead of the Monster Energy Dub Tour – the car returned to its original looks.

Just three years later, the Ford Fiesta ST HFHV (Hybrid Function Hoon Vehicle) was built. Powered by a 2.0-liter EcoBoost engine producing 350 horsepower and 515 pound-feet of torque in most applications but could produce up to 600 hp in certain setups. It was built by M-Sport, but was further developed by the Monster World Rally Team. This car starred in Gymkhana 5.

The original, the classic. The car that Ken Block used in his first Gymkhana video was this Subaru Impreza WRX STI. Built by Vermont SportsCar and powered by a flat-four engine, this STI produces 565 horsepower and tips the scales at just 2,775 pounds. It was used extensively on the rally stage and Gumball 3000, but it truly made a name for itself in Gymkhana.

One of Ken Block’s lesser-known cars is this awesome 1974 Ford Bronco. It’s a dramatic departure from the rest of the vehicles on this list and was built by NSB Performance in Edgewater, Florida, to be the ultimate grocery getter. Powered by a 5.0-liter V8 engine paired with a six-speed automatic transmission, the restomodded Bronco belts out 435 horsepower and 400 pound-feet of torque.

Built by M-Sport as Ken Block’s rallycross car for 2013, this 600-horsepower hot hatchback made its debut in the sixth installment of Gymkhana. It’s able to sprint to 60 miles per hour in just two seconds and wears a wicked black-and-white livery inspired by the Fiesta rally car from 2011. Interestingly enough, a replica was built – dubbed RX43B – for use in the FIA World Rallycross in 2014, while the actual RX43 campaigned in Global Rallycross in 2014 to 2015.

A collaboration between Ford Performance, Ken Block’s Hoonigan Racing, and the U.K.’s M-Sport, this handsome Ford Focus RS was built for rallycross. Powered by a turbocharged 2.0-liter four-cylinder engine, this RS pumps out 600 horsepower and can sprint to 60 miles per hour in two seconds flat. It may not be the most recognizable hot hatch of the bunch, but it’s one of the prettiest… and the fastest.

Amongst a sea of Ford Focus and Fiesta hatchbacks, Ken Block debuted this bodacious Ford Escort MK2 RS in Gymkhana spec in 2015. It was the first rear-wheel-drive Gymkhana-spec vehicle, and sports a naturally aspirated 2.5-liter four-cylinder pumping out 333 horsepower. Block actually raced the RS at Rally New York in 2009, but it’s mostly for show… and drifting videos.

Even more insane than the Escort MK2 RS is this 700-horsepower (!) Ford RS200, which made its debut in 2017. Complete with a turbocharged 2.1-liter four-cylinder engine and KW coilovers, this RS200 is one of just 200 units that rolled out of the Ford factory in 1986 as means of meeting homologation standards. Rumor has it that it will make its Gymkhana debut in the 10th installment. As will the next car on this list...

Hoonigan? Try Hoonitruck. This 1977 Ford F-150 has a whopping 941 horsepower courtesy of a turbocharged EcoBoost V6. The bodywork is made of hand-shaped aluminum and it puts its power to the ground courtesy of its all-wheel-drive system. The Hoonitruck will show up for the first time at SEMA next week, but it will make its video debut in Gymkhana 10. But it’s still somehow not the most badass truck on this list...

Meet the Ford F-150 RaptorTRAX. As its name suggests, it swaps off-road tires forsnow trax. And it looks awesome. Powered by a supercharged 6.2-liter V8, this rugged truck produces 600 horsepower and comes with a six-speed automatic transmission. It made its debut in a Monster Energy video, which took place at Baldface in Nelson, British Columbia, Canada.

It’s hard to decide between two classic Ford Escorts and a badass RS200, but, ultimately, this one takes the cake. With an upgraded turbocharged 2.0-liter engine producing 340 horsepower, and a unique livery that pays homage to the 2016 Ford Focus RS RX we mentioned earlier, it’s an absolutely beautiful classic. Or at least, it was…

Block and co-driver Alex Gelsomino were competing in an American Rally Association event earlier this year when an unfortunate off-course excursion ignited a fire, completely destroying the car. Block and Gelsomino were not injured, but the Cozzie’s legacy is such that it’s still one of the best Block creations of them all.

Arguably the most insane Ken Block build to date is the Ford Mustang Hoonicorn, which made its debut in 2016. Powered by a Roush Yates racing supercharged V8, version one of the Hoonicorn pumped out a raucous 845 horsepower and 720 pound-feet of torque. And it tore up the pavement in Gymkhana 7.

But only a few months later, a second version of the Hoonicorn debuted – this time with a twin-turbocharged Roush Yates V8 good for 1,400 horsepower and 1,250 pound-feet of torque. After a quick exterior makeover, Hoonicorn V2 made its debut on film in the Climbkhana: Pikes Peak video. 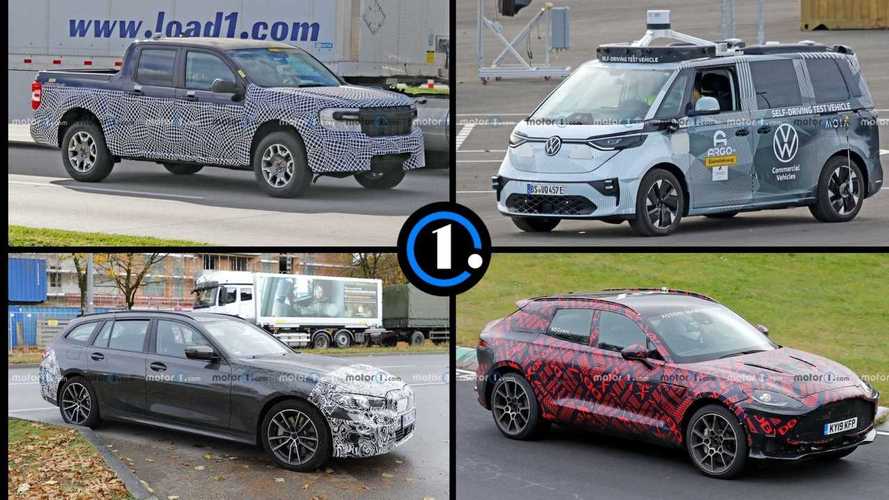 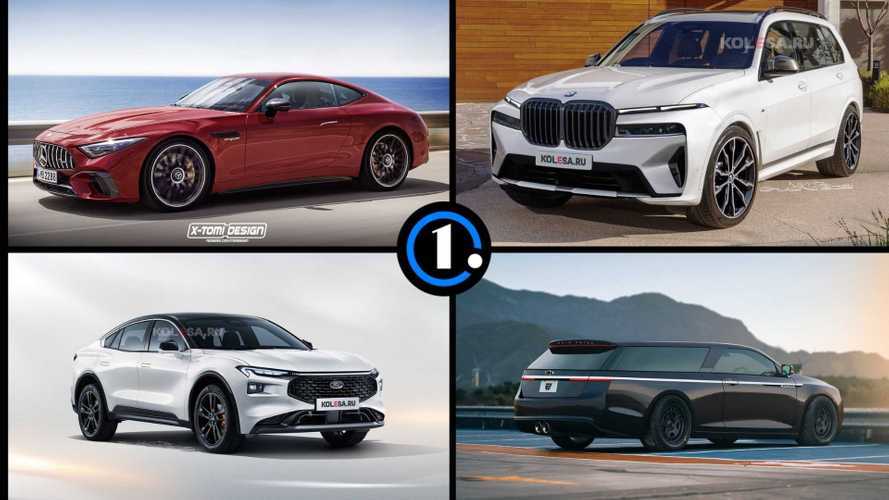 Ken Block has been drifting his way into our hearts since the release of the first Gymkhana video in 2006. Since then, the professional rally driver and all around hooligan has unveiled eight more iterations of the video series, with a 10th on the way (and a Pikes Peak Climbkhana in between).

After more than 10 years of tearing up the streets, Block has amassed a pretty impressive collection of cars. Some of his vehicles are designed exclusively for the road, others are prepared for the rally stage, but, outside of a couple of notable exceptions, they’re almost all Ford products. Here they are, starting with the good and ending with the insanely awesome.

Trailer For Ken Block's Amazon Series Reveals Making Of Gymkhana
By: Jeff Perez
++
Got a tip for us? Email: tips@motor1.com