From neon lights on a Mustang to hardcore off-roading Raptor, Ford has done some intriguing things with these one-offs.

Ford Racing boosted its performance by installing a supercharger and tuned exhaust to push the 4.6-liter V8 to 400 horsepower (298 kilowatts).

The AV8R still holds the record for the highest auction price for one of Ford's EAA custom vehicles by bringing a staggering $500,000.

Ford took inspiration from a specific P-51 Mustang fighter plane with the nickname Dearborn Doll with its custom pony car for 2009.

Like the real plane, the Mustang featured a pinup-style drawing on the front end. The body was a shade called Satin Silver. There were also yellow accents at the nose and tail.

Ford Racing supplied the exhaust, supercharger, and a handling package for the car.

In 2010, famous Ford tuners Carroll Shelby and Jack Roush teamed up to create a one-off Mustang with inspiration from the famous SR-71 spy plane. It featured a matte gray body, and there was a 5.0-liter V8 with a 2.3-liter Whipple twin-screw supercharger under the hood. It also packed a Roush intake, Ford Racing exhaust, and a roll cage.

The U.S. Navy's famous Blue Angels stunt flying team was the inspiration for the custom Mustang GT in 2011. It had a dark blue body with yellow stripes. Inside, there were Recaro seats with the Blue Angels' crest on them.

In 2012, Ford paid tribute to the famous Tuskegee Airmen. The Mustang featured a matte aluminum body with red and yellow accents. Under the hood, the V8 received a Whipple supercharger.

The U.S. Air Force's Thunderbirds is an aerial acrobatic team that does amazing things with aircraft. In 2013, the group celebrated its 60th anniversary, and Ford used the opportunity to create a custom Mustang with a red, white, and blue livery like the crew's planes. It also had a widebody kit and 22-inch Forgiato wheels.

In 2014, Ford took inspiration from the Lockheed Martin F-35 Lightning II for its custom Mustang. The model featured matte titanium paint on the body with yellow and blue accents. There were carbon fiber parts for the front splitter, side sills, and rear diffuser.

Rather than celebrating a plane, Ford commemorated the Apollo space program in 2015. The Mustang had a bright white body with a mix of matte and gloss black touches. There were also carbon fiber parts for the front splitter, rear diffuser, and side sills.

Ford auctioned a very yellow Shelby GT350 in 2016 that paid tribute to the P-51 with the record for the fastest prop plane to travel coast to coast. In addition to the lemony color, it also sported green lights for an even more eye-popping appearance.

For the first and (so far) only time, Ford didn't auction a Mustang at Airventure in 2017. Instead, the Blue Oval built a Raptor inspired by the F-22 fighter jet. It featured an upgraded 3.5-liter biturbo V6 pumping out 545 horsepower (406 kilowatts). A roof-mounted light bar added some style, too.

For 2018, Ford has a 700-horsepower, supercharged Mustang to auction at EAA Airventure. It's paint scheme takes inspiration from the Eagle Squadron P-51 Mustangs that American volunteers flew for the Royal Air Force during World War II.

Vaughn Gittin Jr. will drive the car at the Goodwood Festival of Speed before the Mustang will go up for auction.

Since 2008, Ford has created a custom, aviation-themed vehicle for the annual EAA AirVenture in Oshkosh, Wisconsin, and selling them at a charity auction during the event has raised over $3 million.

The Blue Oval is already teasing this year's custom machine – the Eagle Squadron Mustang GT. It pays tribute to the American volunteers who joined Britain's Royal Air Force during World War II. For fight-plane-like power, Ford Performance gives the 5.0-liter V8 a supercharger that boosts the output to 700-horsepower (522 kW). A carbon fiber widebody kit adds a meaner look, too.

With the first look at Ford's latest, plane-inspired custom Mustang, it's the perfect opportunity to check out this program's evolution over the years and see some fascinating one-offs. 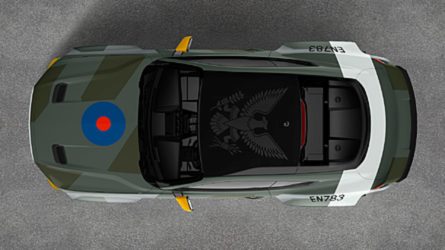 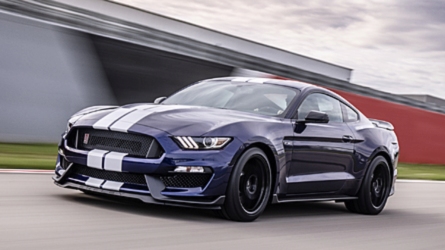