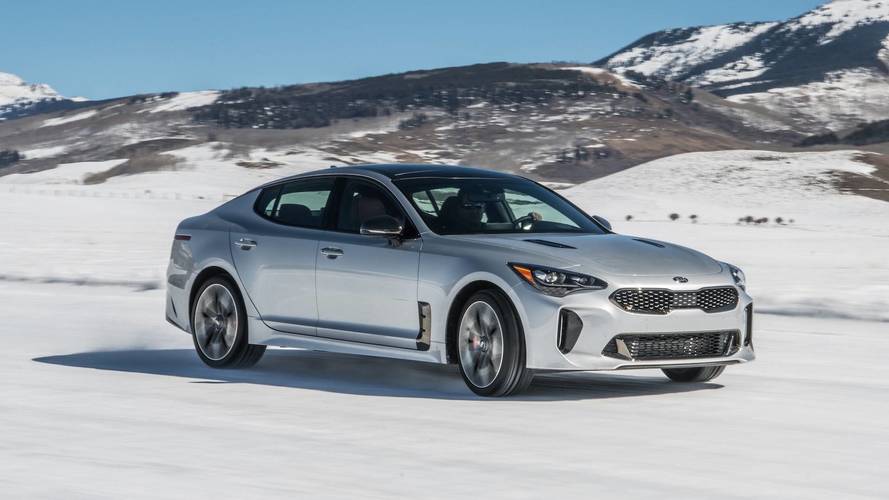 Until now we've enjoyed Kia's racy new Stinger sports sedan almost exclusively on race tracks and winding roads in warm weather. But I found myself trying out the all-wheel-drive version of Kia’s sportiest machine tucked away in the Rocky Mountains just outside of Gunnison National Forest, Crested Butte, Colorado, on a course carved out of ice and snow.

The goal was to put Kia’s all-wheel-drive system through the wringer in some of the toughest winter conditions known to man. The same rigorous routine that the Stinger underwent before it hit production on the lakes of Arjeplog, Sweden. Both locales do share a few climatic similarities.

For one, they’re both cold. In this case, temperatures dipped into the single digits during the evening, and stayed in the teens throughout the day. Those temperatures, paired with a 9,000-foot elevation, gave us the opportunity to see how the Stinger performed – particularly the 365-horsepower, biturbocharged 3.3-liter V6 and the highly touted all-wheel-drive system – in extreme conditions.

With the brand’s first-ever adjustable suspension, and an advanced all-wheel-drive system to boot, the Stinger GT had no shortage of grip. The two work in perfect harmony, softening or stiffening shocks and proactively putting power down, depending on driving conditions. Even though the Stinger rides on a rear-wheel-drive biased platform, the all-wheel-drive system has the ability to send as much as 50 percent of engine torque to the front axle via a mechanical clutch in the transfer case, depending on the drive mode.

In Comfort mode, for example, up to 40 percent of engine torque is sent to the front wheels. In Sport mode that number is just 20 percent, which gave me the opportunity to put the Stinger GT plenty sideways in this particular setting.

Our day started out with a simple exercise: Drive through a slalom course in each of the Stinger’s five different drive settings to see how the suspension and all-wheel-drive system reacted to the snowy conditions. Comfort mode with traction control on – and beefy Michelin Pilot Alpin PA4 winter tires equipped – the Stinger GT was composed in the twisty cone course. Planted, precise, and well balanced, only noticeable sliding occurred with too much speed.

After a slow corner and a quick turnaround, we would do the same slalom course, this time in Sport mode with 80 percent of the power sent to the rear wheels. Even with less help from the front tires, the Stinger was still grippy. Quicker throttle response sent the car sliding more irregularly at speed, but for the most part, the Stinger made it through the course tidily and without hassle. The final test was more challenging; Sport mode with traction control off.

Most of my morning was spent testing in the former setting. On the slalom with traction control off, feathering the throttle would lead to better results, and light steering input would slowly guide the car around each cone. Too much of either, and the Stinger would attempt to pull off a pirouette.

I’d run through a range of driving exercises throughout the day, at different settings, learning the ins and outs of the vehicle and the track, all in a lead up to a one-lap sprint around the full course. But by mid-afternoon, the sun had turned the fluffy snow-plowed corners into ice, making them even more difficult to traverse, as I quickly found out.

Barrelling into the first corner, even using Comfort mode and with traction control fully engaged, the Kia was almost immediately sideways. The grippy Stinger’s all-wheel-drive system and winter tires were just no match for the daunting sheet of ice underneath. A light flick in the opposite direction and letting off the throttle would ease the Stinger back into submission, and allow the car to sprint down the back chicane and into turn three, the sharpest corner of the track.

A sloppy entrance into the turn would leave you either stuck in a snowbank if you understeered forward, or backwards facing oncoming traffic if you oversteered. But once again the all-wheel-drive system proved worthy, giving the vehicle plenty of grip while allowing for a pretty gnarly amount of rooster tailing at the same time with Sport mode ticked. A quick right into Turn 4, and a long, sweeping corner onto the front straight would be the Stinger’s toughest test yet.

Slow and steady, theoretically, would have given me the ability to navigate this particularly tough corner, but on an icy apex with too much speed, not even the grippiest tires could have prevented the Stinger from turning its nose and ending up backwards on the track. Kia’s AWD system may be good, but the car was still quick to reprimand me for my poor turn-in by almost immediately kicking out its tail. Jeremy Clarkson’s theory of "more power" didn’t help my case either as I watched snow and ice spout out from the back tires. Lesson learned.

Eventually, though, I did get it right – and the Stinger GT showed me exactly what it was capable of. The Kia is fantastically fun on snow and ice. Engineers made it a point to tune this vehicle well, even in some of the toughest driving conditions for a rear-drive biased car. Finding the right line, putting down just the right amount of power, and understanding how the vehicle reacted in the corners left me sideways and smiling at the end of it all, with a better understanding of how the advanced all-wheel-drive system really works.