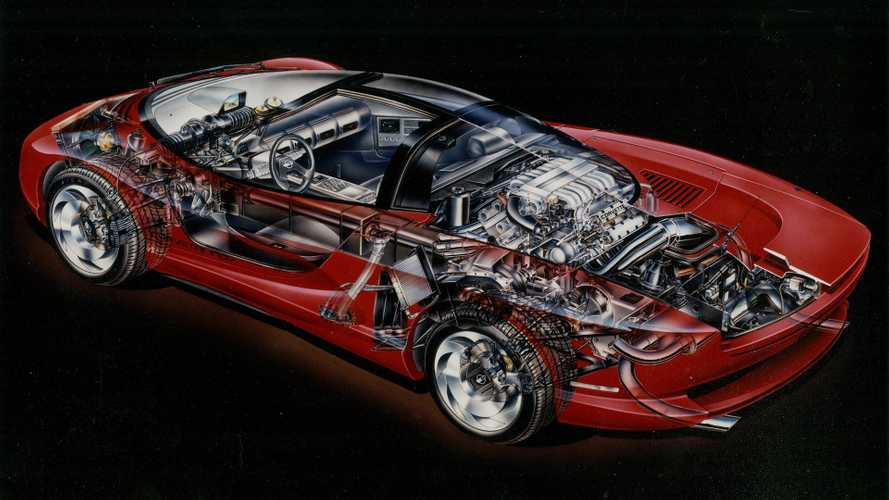 Cutaway artist David Kimble takes us back 30 years for a unique look at the 2020 Corvette's predecessor.

Automotive artist and cutaway master David Kimble has “opened up” a plethora of cars in his long career, but he has an affinity for the Corvette. He's sketched a few models over the years, but he also has a personal fondness for America's sports car that started in 1967, when he tried to order a new Stingray with the infamous L-88 package.

Flash forward 20 years – Kimble found himself in the halls of GM's skunkworks gathering photos and info for the project you see below. This is the Corvette Indy prototype from 1988 – a revised version of the bonkers Corvette Indy Concept from 1985 that was just a mock-up. This version had an actual engine, and it was a stepping stone to the famous CERV III mid-engine prototype in 1990. We all know what mid-engined Corvette creation would come after that.

Such ideas have come and gone throughout the Corvette's long history, but the appearance of the Indy Concept at the 1986 Detroit Auto Show was a bit different. For starters, there was still considerable buzz in the motoring world for the C4 Corvette, which had launched just a couple years prior. General Motors was also acquiring Lotus that year, so there was interest in bringing some of the company’s niche performance expertise to bear.

Long story short, the mock-up Indy Concept with its promise of all-wheel drive, epic horsepower, and a host of techno-gadgetry received enough interest to warrant construction of a couple of prototypes by 1988. In the end, only one would be fully functional, but fortunately for us, Kimble was in the middle of the action to peel the layers back in a cutaway. Thing is, he wasn't there for the car per se, but the engine.

Around this same time (1988), word began to spread about some kind of new “king of the hill” super Corvette with a DOHC V8 making 400 horsepower. That car would ultimately become the legendary C4 Corvette ZR-1, and to Chevrolet’s credit, the details were well protected. However, the ZR-1’s 32-valve LT5 V8 was pulling double duty as the mid-mounted power plant for the Indy Concept, so a magazine contracted Kimble to do a cutaway of the car. Having a sketch of the prototype would be neat, but the real goal was to get a good look at this herculean Lotus-designed V8 before Chevy made an official announcement.

Fortunately for us, Kimble is a man who doesn’t skimp on a project. He took a good look at the engine, but as you can also see, he spared no detail on the rest of the car. The engine is certainly front-and-center in this cutaway representation of the prototype, but that also gives us an outstanding look at its transverse packaging in the carbon fiber/Kevlar body. Looking closely at the engine, you’ll see the intake plenum varies slightly from the one used on the production LT5 in the ZR-1. The exhaust manifolds are obviously different as well, twisting around to meet in a single muffler with dual tips out the back. Otherwise, the mill is very much like the LT5 V8 that powered the ZR-1 from 1990 through 1995.

The engine might have prominent placement in the cutaway, but it’s not the only item of note at the rear. The Indy’s fully independent rear suspension, which ditched traditional springs and struts for an exotic active setup, is visible through the massive steamroller tires and directional Corvette wheels. The flush rear wing design might look familiar too, because it was adopted for the new-for-1993 Chevrolet Camaro.

The prototype's two-seat cockpit was a step up from the original concept’s single-seat design. Rendered here, Kimble captures some of the technology that was revolutionary then, but virtually taken for granted now. For example, the screen on the center of the dash is for a rearview camera, while the digital instrument cluster also has provisions for navigation.

You’ll also notice a lack of linkages around the accelerator pedal – Kimble is known for including such details in his cutaways, but the Corvette Indy was fully drive-by-wire. It was also equipped with anti-lock brakes, and since we’re already looking at the area around the gas pedal, note the axle shaft extending over to the left front wheel. Just as the original 1986 concept promised, the functional Corvette Indy prototype was all-wheel drive.

Ultimately, the work invested into the Corvette Indy prototype would transition to Chevrolet’s CERV III concept in 1990. Though not technically called a Corvette, the CERV III borrowed and improved upon many of the features from the Indy. Engine power was boosted significantly thanks to a pair of turbochargers, the design was tweaked to be a bit more mainstream, and though it ultimately never entered production, it was all but production-ready. Had executives given it the green light, this could've been the C5 Corvette in 1997. But alas, it wasn’t meant to be.

Now that a mid-engine Corvette is finally here, it's apparent that the new Stingray's styling was indeed influenced by these concepts, notably with the forward-canted side intakes. Perhaps David Kimble is already at work on yet another Corvette cutaway, exercising his extraordinary talent on the 2020 Stingray so we can once again see beneath the surface to appreciate the intricacies of performance.