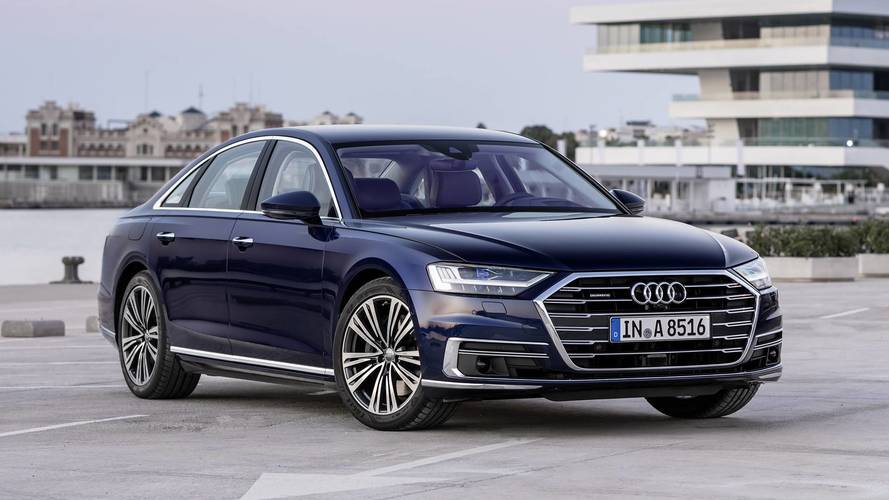 The new Audi A8 provides a stupendously comfortable ride – read our First Drive for the full story – but it also brims with computers and sensors. There are 24 exterior sensors for safety systems alone, for instance, and Audi says the computer that integrates all that data, called the zFAS, has more processing power than all the computers in the old A8 put together. But those are just the headlining facts. Here’s a look at ten other impressive technologies built into Audi’s newest luxury sedan.

Optional active suspension uses an electric actuator at each corner of the suspension to raise or lower that wheel independently. At its core, this system allows for active anti-roll, anti-pitch, and anti-dive, similar to systems from other cars, including the Bentley Bentayga and Porsche Panamera/Cayenne. But the A8’s goes one step further by using those wheel actuators to raise or lower the suspension in anticipation of bumps, further smoothing out the car’s ride quality.

The system gets its input from a forward-facing camera that operates at 18 frames per second, evaluating the road surface ahead to create a virtual “map” of upcoming obstacles and commanding the suspension to move appropriately. In a demonstration driving over speed bumps and speed tables with the system turned on and off, the difference is astounding. With it disabled, well, the car feels like any other, bumping occupants up and down over the obstacles. With it enabled, there’s almost no indication the car drove over anything but a perfectly smooth road; as the video below shows, the body simply raises and stays almost totally flat as the car crosses the ramp. Sadly, the A8s available for drivers on public roads did not have this feature enabled, so I can’t say how it will perform in real-world use.

One more trick: To ease ingress and egress, the suspension automatically raises by 1.6 inches when you open a door, then lowers 10 seconds after the door has closed. The goal is to make it just a bit less difficult to climb in and out of the Audi versus when it’s sitting at its regular ride height. With the car parked and the engine turned off, you can do that three times before it’s temporarily disabled to save the battery.

The A8 is the second Audi with a 48-volt system. The first was Europe’s SQ7 performance crossover, which needed the extra juice to run its electric turbocharger. In the A8, it’s needed to power the active suspension actuators and for the mild-hybrid starter-generator (read more about that in our First Drive story). The 48-volt battery is a 10 amp-hour lithium-ion unit mounted at the rear of the car. However, the majority of the car’s electrical system still runs on a traditional 12-volt battery that’s mounted in the trunk; a DC-DC converter connects the two systems. It will probably be some time until other parts of the car’s system run on the 48-volt wiring, as an Audi engineer points out all existing automotive electronics (lights, sensors, power windows, displays, etc etc) are still designed for the 12-volt standard. For now, then, one could still jump-start the A8 with another car and vice versa.

The 8.6-inch touchscreen at the bottom of the center stack primarily serves as the climate-control interface, but it can switch to work as a virtual keyboard or as a place to write words, letters, and numbers. When entering a navigation address, you can simply write an entire word, such as “Munich.” Existing systems require you to write just one letter at a time on a tiny touchpad; Audi’s feels more natural, like sketching on an iPad.

Getting t-boned is bad news in any car. The Audi A8 attempts to combat that by quickly raising the active suspension on one side of the vehicle by 8 centimeters (3.1 inches) if it detects an impending collision from the side (four side-facing radar sensors, two at either end of the vehicle, detect oncoming vehicles). The goal is to focus the other vehicle’s impact onto the Audi’s lower rail below the doors, as that’s much stronger than the door panels themselves. This would help protect occupants if the A8 were being hit by an SUV, for instance. It works at speeds up to 37 mph.

Electric door handles can feel like a gimmick, but the A8’s have a lovely tactile feel. Both the interior and exterior handles are electric, so you need but the gentlest touch to the open them (though pulling further on the inside handles actuates the manual-opening mechanism). Aside from making opening the door ever-so-slightly easier, the electric handles are critical for enabling the safety feature listed in the next bullet point. By the way, curious how you’ll get into your Audi if the battery dies? There are hidden mechanical keyholes in the driver’s door and trunk as backups.

Nobody wants to open their car door into the path of a cyclist or another vehicle, so the A8 has a system to prevent you from opening the door in those situations. If the blind-spot sensors detect an object approaching from behind, the system illuminates the blind-spot warning lights in the mirrors and flashes that door’s ambient lighting red. Moreover, when you pull the electric door handle to exit, the system will wait 0.8 second before allowing the door to actually open – an amount of time Audi hopes will allow the other road user to pass safely.

The Audi Q7 also offers the exit warning indicators, but the A8 is the first to actively prevent occupants from exiting into the path of oncoming traffic. It works on all four doors, and is active for up to two minutes after the engine is shut off at the end of a journey, and for two minutes after the car is unlocked at the start of one.

Like many modern cars, the Audi A8 will offer wireless charging for compatible phones; simply slide your phone into the small pocket in the center console to juice it up. Unlike other cars, however, that charger also boosts the phone’s cellular signal, transmitting it through the car’s roof-mounted antenna to improve reception. After all, the inside of a metal box is hardly the best place for your phone to get a strong 4G link. In the U.S., Audi is still working on FCC approval for this feature; the government agency would require anyone using the booster to first register the booster device’s ESN with their wireless provider.

Rear-wheel steering isn’t new, but the A8’s system has an impressive level of performance. For starters, the rear wheels can pivot up to 5 degrees in the opposite direction of the fronts at low speeds – more than rival systems. It’s also coupled with variable-ratio steering, meaning that in parking situations, far fewer hand-over-hand steering wheel turns are required than normal. To put it to the test, I drove an A8 through an extremely tight cone course. With the system enabled, it was easy to slink the long sedan through the circuit. With the system disabled by an engineer (owners won’t be able to turn it off), I needed a lot more patience and much wider arcs to get around. It makes the car “feel” much shorter, easing parking. The numbers tell the real impact: the system shrinks the new A8’s turning circle by three feet compared to the outgoing car.

Whenever you park the A8 and shut it off, the rear wheels automatically reset themselves to the straight-ahead position. Audi engineers say some within the company wanted the car to leave the wheels angled when parked so one could brag about the technology to friends and neighbors; others thought it might lead passersby to conclude the car’s suspension was damaged. The latter train of thought won out.

Traffic Jam Pilot will provide Level 3 autonomous driving in certain situations. On highways with a divider between each direction of traffic, and when traffic speeds are below 37 mph, TJP will take over all steering, brake, and accelerating functions. It’s more advanced than existing adaptive cruise features because Audi says the car will accelerate on its own when traffic moves off, and the driver won’t need to keep a hand on the wheel or pay continuous attention. The system will just drive in busy traffic completely by itself.

There’s only problem: Audi does not believe the system is legal yet. An official says that the main hurdle is “Regulation 79” of European Union rules. It requires, in part, that even with steering-assist features, “the driver remains at all times in primary control of the vehicle.” Still, Audi is confident it will be able to get regulatory approval for the system; Traffic Jam Pilot will be rolled out, country by country, as laws permit.

At some point, Audi plans to also offer a system that will let the A8 park itself autonomously in garages without any driver on board; the company first demonstrated this in A7 prototypes at CES in 2013. The software won’t be enabled for some time, as it requires garages that are appropriately mapped and networked. For now, though, the owner will be able to “drive” the car short distances in and out of parking spaces or garages remotely thanks to a smartphone app feature called Parking Pilot; the BMW 7 Series has a similar feature from its touchscreen key fob.

In-car 360-degree camera systems are nothing new, but Audi adds a few extra features thanks to some clever image processing. For starters, there’s a new 3D view that lets you pan and pinch-to-zoom on a virtual recreation of your car. It’s as if there’s a drone filming the car from the outside, providing an amazingly clear look at your surroundings, yet all the footage comes from four small cameras. If you start driving with the system active, the wheel on the virtual recreation of your car on the screen even turn. The camera system will also now provide red warning indicators if you’re about to curb one of your pricey alloys; there’s a close-up look that will show what your rim is about to hit. In fact, the car will automatically brake if you’re about to bump something while parking.

Elect the HD Matrix option, and each headlight is fitted with 138 LEDs that can be individually turned on and off. That allows for cornering illumination, with the A8 taking input not just from the steering wheel but also from the navigation system; approach a curve, and the nav system will help guide light around the corner before you even start to steer. The high beams also automatically dim portions of the light that are pointed to other drivers, preventing dazzling them. Audi spokespeople are “confident” this tech will be allowed in the U.S. – maybe not at launch, maybe only with an exemption from the slow-moving NHTSA – but confident all the same.

Perhaps the coolest illumination is the laser headlight option, and not only because I desperately want to tell my friends my car has lasers. Above 44 miles per hour, the laser illuminates to “double” the distance you can see with the high beams on. That would be extremely useful if, say, one were doing 155 mph on the autobahn at night. But in the U.S., regulations require that the laser system be limited so that it does not project any farther ahead of the car than standard ones would. It will still be bright, just less powerful than in Europe. Audi already offers laser headlights here on the low-volume R8 V10 Plus Exclusive Edition.

Gallery: Coolest Technologies On The 2019 Audi A8