10 Most Hay-Raising Wrecks From Goodwood Hillclimb 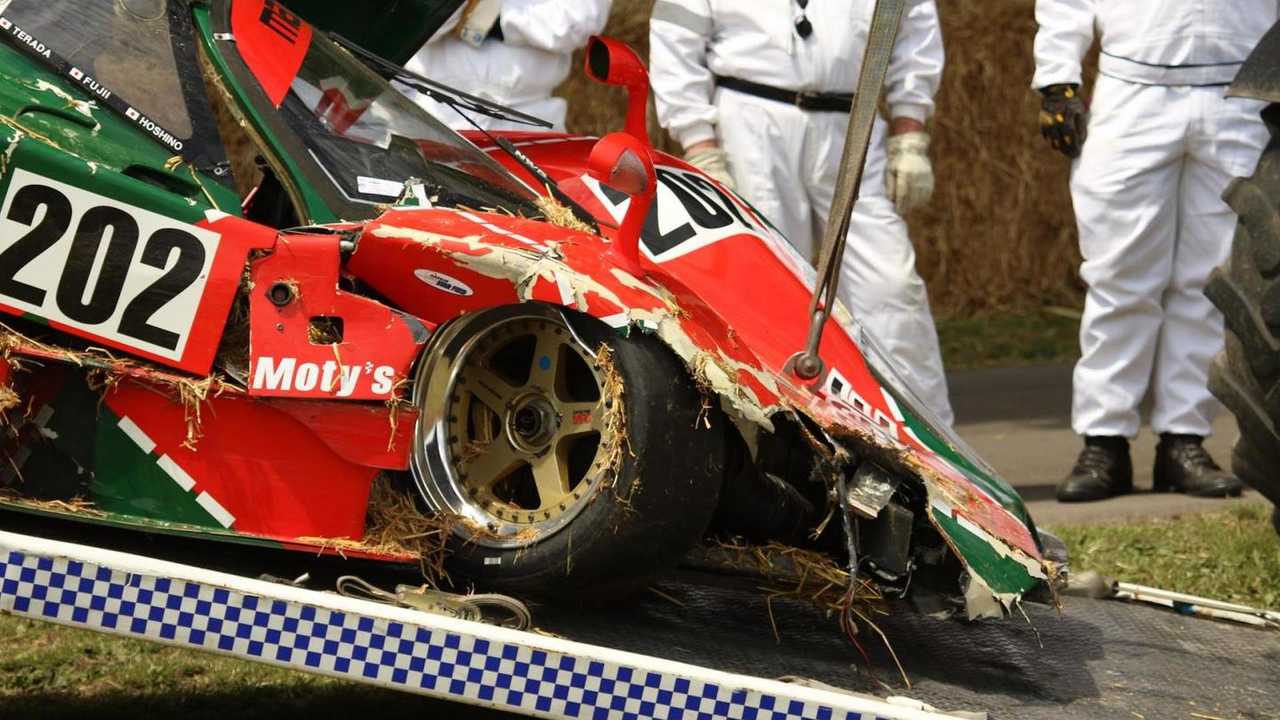 The rare and expensive vehicles at the Festival of Speed don't always return to the garage in one piece.

The Goodwood Festival of Speed Hillclimb assembles a massive collection of the world’s greatest performance and race cars. Unfortunately, the 1.16-mile course can be tricky and occasionally catches out drivers. While serious injuries are rare, it hurts for us to watch these amazing machines go flying into the hay bales.

The most spectacular crash so far at the 2017 hillclimb is Pat Doran sliding his Ford RS200 Evo 2 into the hay. The impact ripped the rear bodywork off of the rare rally car. There was some good news, though. While the crash looked nasty, Doran’s crew was able to repair the damage overnight, and he announced plans to take it back to the course for another run.

In 2015, this Mazda 767B race car incurred serious damage in its crash. Driver Seniji Hoshino walked away, but it was quite an expensive mistake. This car finished first in the GTP class at the 1989 24 Hours of Le Mans and came in seventh overall. Gooding & Company sold a different example for $1.75 million at its 2017 Amelia Island auction.

Chris Hoy has earned multiple medals as an Olympic cyclist and shown success as a racing driver, too. However, he pushed a little too hard while driving a GT-R Nismo at Goodwood and crashed through several rows of hay bales before coming to a halt. This one was even more embarrassing for Hoy because this car belonged to Nissan exec Andy Palmer – now leader at Aston Martin. Wrecking the boss' vehicle is always awkward.

This isn't the most spectacular crash in terms of damage, but the vehicle's rarity makes it special. The one-off concept was an interesting attempt at imagining a performance-oriented, two-door crossover. A mid-mounted, Lamborghini-sourced 5.2-liter V10 produced 550 horsepower and channeled the power to an all-wheel-drive system through a seven-speed dual-clutch gearbox. The creased rear fender really hurt the model's good looks.

This Gumpert Apollo had a moment during the 2012 Festival of Speed but neither the driver nor passenger suffered injuries. The tail steps out in the corner, and the driver appears to try to catch the slide. There's not enough run-off, and the hay catches the supercar.

The Lotus 98T raced by Ayrton Senna had an incident at the 2013 Festival of Speed. Dropping two wheels onto the grass caused the car to spin into the hay bales. The incident ripped off the driver's side front wheel and did major damage to the wing. You can watch two views of the crash, above.

Race cars can be tricky to control, and this Chevy Cruze from the British Touring Car Championship suffered a high-speed wreck that crashed through two rows of hay bales. The impact did major damage to the front end, but the driver wasn't injured.

Don't worry, you're not about to see this beautiful Jaguar XJ220 explode into countless pieces. The driver spins the classic supercar and barely kisses the hay. The crowd loves the show, though.

Off-road racing master Rod Millen had his Pikes Peak Toyota Tacoma at Goodwood in 2012. He went off track, and the car started shimmying. The incident didn't look too serious, but the impact tore off the front end.

The Goodwood Festival of Speed started in 1993, and judging by this compilation of crashes from the 1994 event, drivers pushed a lot harder in the early days. Highlights here include a Jaguar XJ220 slamming through the hay, and a Ferrari Formula One car flying through the air.