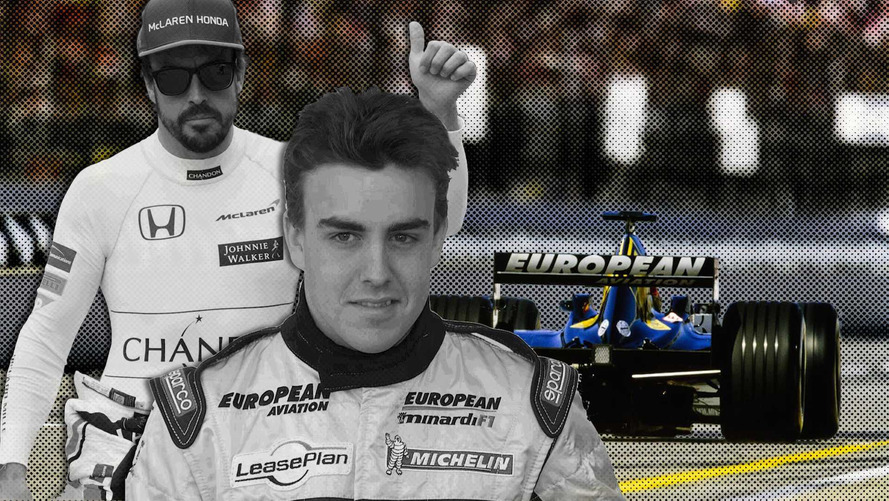 The F1 star suits up for the Indy 500 next week, but nearly 16 years have passed since his first run at Indy.

Spanish Formula 1 driver  Fernando Alonso arrived at the Indianapolis Motor Speedway as a rookie facing a new experience. Are you thinking of last month’s rookie test, when Alonso lapped the Speedway in his McLaren Honda Andretti Dallara Indycar for the first time?

No, I’m talking about September 2001, when a fresh-faced 20-year-old Alonso arrived at Indy for the very first time for the U.S. Grand Prix. That was Alonso’s first time as a rookie at Indy, and his performance foreshadowed his future success.

It was customary in those days for the Minardis to hold down the back row of the starting grid in echelon, each of them a second or more per lap slower than the next-slowest cars.

Mika Hakkinen had scored a pole position, only to have it stripped by officials for a pitlane infraction during qualifying. Hakkinen went around a car stopped at the pit exit, thinking it was waiting to do a tire-warming burnout, and for that officials had docked him his fastest lap, leaving him steaming in second place.

He put that anger to work in the race, storming to a popular victory, one that would prove to be his last Formula 1 win.

I’m talking about September 2001, when a fresh-faced 20-year-old Alonso arrived at Indy for the very first time for the U.S. Grand Prix.

Further down the starting grid, however, there were interesting things happening. The usual Noah’s Ark two-by-two processional, with each team’s two cars qualifying side-by-side, was largely broken up in this race. Only the BMWs of Ralf Schumacher and Juan Pablo Montoya started together on the second row of the grid.

The infield road course of the mighty speedway seemed to have scrambled drivers, as they struggled for grip with the low-downforce configuration dictated by the long run on the oval.

It provided a good look at the relative abilities of teammates to cope, so as the correspondent for European Car magazine at the time, I scanned the timesheet for large splits showing that one teammate had dominated another.

What I saw was astonishing. Alonso had put his car 17th on the grid, while Yoong was 22nd, and last. On track, Yoong struggled and bobbled, while Alonso deftly drifted his miserable Minardi through the same infield turns, visibly faster and in better control.

Because no one cared about the Minardi team, I had no trouble scheduling a half-hour one-on-one interview with him. Things are a bit different for him now.

Seeing this, I thought Alonso looked certain to be a future star, and because no one cared about the Minardi team or 17th-place qualifiers, I had no trouble scheduling a half-hour one-on-one interview with him. Things are a bit different for him now.

The F1 teams used the garages built along the pit lane for the cars, while the paddock garages became satellite offices, so Minardi’s PR woman arranged our meeting in Minardi’s office in the infield building.

It was down the row from the McLaren office where boss Ron Dennis had hosted a press conference the day before. In characteristic fashion, Dennis exclusively employed English words, but arranged them into an order that provided no information whatsoever.

Coming off that disappointment, I wasn’t sure what to expect from Alonso. I found that he spoke English with the same accent that is now familiar to us, but in those days his vocabulary was much more limited, so we occasionally struggled in our chat, but it mostly went fine.

Alonso slipped into F1 largely under the radar after finishing fourth in Formula 3000 in 2000, behind Bruno Junqueira, Nicolas Minassian, and Mark Webber, so I asked him to recap his background.

Alonso had skipped the customary year in Formula 3, jumping from Formula Nissan in 1999 to Formula 3000, so he was only three years removed from karts when he began in Formula 1.

“My father made a small go-kart and I did my first race when I was three years old,”

“My father made a small go-kart and I did my first race when I was three years old,” Alonso  explained. Incredible? Maybe, but that was only his age at his first race.

Alonso actually started driving the car the year before, he said. Here is where I thought he must have confused his English numbers. That couldn’t be right, could it? Driving a kart at two?

“Yes, the first time [driving] was when I was two, and racing when I was three,” he laughed. The kart had been intended for his older sister, but with some adjustments, it worked for her precocious younger brother when he demonstrated more interest.

“After that I started racing in professional go-karting, racing in Spain, then international as well. I won the world championship in ‘96 in go-karts,” Alonso said.

Alonso bagged the Formula Nissan championship, and although he finished fourth in F3000, winning the season-ending race at Spa opened the door to Formula 1.

With the recent arrivals of youngsters such as Max Verstappen, Kevin Magnussen, and Carlos Sainz Jr. to F1, the idea of a driver rushing to the top level is becoming familiar.

Alonso wrestled with whether he should enter F1 with a bottom-level team, or solidify his credentials with the goal of starting his F1 career with a competitive team. He decided to go for the opportunity that presented itself.

“That was a possibility at the beginning of the year; race for Minardi or test for Renault and race for Super Nova, which is the best team in Formula 3000,” Alonso said. “The Formula 1 opportunities that you have in your life, there are only two or three and this is one of them,” he concluded.

His experience struggling with an uncompetitive backmarker car proved to be an experience similar to his recent seasons with McLaren Honda.

“It is difficult,” the 20 year-old Alonso could have told his contemporary self.  “It is not easy at all, because you are always at the back and if you do a perfect lap you are 19th.  But if you do a lap and are 21st, nothing is changed, because there is no pressure from the media or something like that. So it is very difficult to push always harder to try to get a better position.”

At the 2001 USGP, Alonso saw the chance to earn his best-ever starting spot in 17th place, which lit a fire under him. “I did five or six 18s, but never 17, so that was the motivation,” he said.

Fingers crossed for the Indy 500 to go better for him.

For the 2017 Indianapolis 500, qualifying times really don’t matter much, as long as the car can be made competitive in race trim and works well in the turbulent air of race-day traffic, so this time around Alonso will be looking more for a top finishing position than a good qualifying spot.

He’s got competitive hardware and has the potential to win the race, just as his Andretti-Honda teammate, F1-refugee, and Indy rookie, Alex Rossi did last year.

At the 2001 USGP, unfortunately, Alonso’s unreliable Minardi let him down in the race, breaking on the 36th lap. Fingers crossed for the Indy 500 to go better for him.

Gallery: Fernando Alonso at Indy in 2001