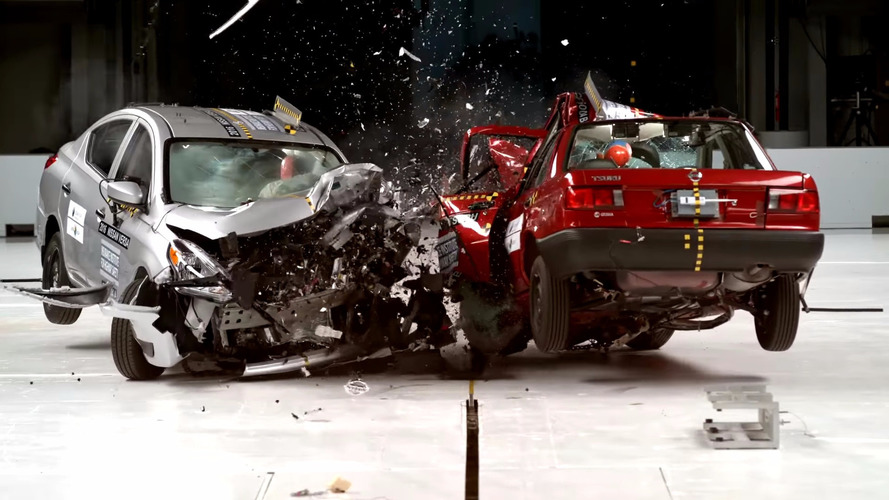 The utter destruction of these vehicles is meant to keep you safe. It's fun to watch, too.

Crash tests let us see the amazing power of a collision from a safe perspective and gives potential buyers an example of how a specific vehicle might perform in an accident. But very often, these clips go beyond just being educational – we find them pretty entertaining. To that end, here are five of the most-viewed crash test videos ever recorded by the Insurance Institute for Highway Safety in the United States.

You haven’t been able to buy a new Hummer H3 in the U.S. since 2010, but IIHS’ evaluation of one has remained the group's most-watched crash test video to date with nearly 4.8 million views on YouTube. Even by the standards of the time, the SUV only had middling results. The model scored 'Acceptable' – the agency’s second-highest rating – in the moderate overlap front crash test in this video. The researchers found a low risk of injury to the head, neck, and chest, but a high likelihood of damage to the driver’s right leg. The Hummer also had an 'Acceptable' score in a side impact and a 'Poor' rating – the worst possible ­– for the head restraints and seats.

IIHS generally performs crash tests in an effort to gauge a specific model's safety, but sometimes the agency does stunts that demonstrate the advancements in driver security over the years. With nearly 4.3 million views, this clip of a 1959 Chevrolet Bel Air colliding with a 2009 Chevy Malibu is a fantastic display at the progress in collision performance over the past 50 years. The view from inside the Bel Air is shocking when the steering wheel smashes the dummy in the face, and then the occupant flies against the ceiling.

Similarly, IIHS also staged a crash between a 2015 Nissan Tsuru and 2016 Versa. If you’re unfamiliar with the Tsuru, it’s a version of the B13-generation Sentra meaning that the vehicle's underpinnings date back to the early ‘90s. Nissan is discontinuing the model in Mexico in 2017. If anything, this collision is even more dramatic than the one between the Chevys. The view inside the Tsuru shows the dummy slamming its face into the A-pillar and the knees crumpling into the body. The significant amount of plastic debris doesn’t look safe, either.

IIHS’ crash test of a 2015 Volkswagen GTI offers the first chance on this list to see a positive result in the agency’s normal evaluations. The small overlap front crash is often difficult for engineers to get right (including, very recently, with the Tesla Model S) because just a quarter of the front end of a vehicle takes the damage.

The 2015 GTI scored the top 'Good' rating on all of the agency’s tests at the time, which made it eligible for a Top Safety Pick award. The GTI missed out on the more prestigious Top Safety Pick+ honor because of a low score for the model's front crash prevention system. An update in 2016 made it a TSP+ recipient. "Measures taken from the dummy indicate a low risk of any significant injuries in a crash of this severity," IIHS noted.

Finally, here’s the test for the 2014 BMW 5 Series, which has over 2.5 million views on YouTube. Despite the sedan’s premium price, IIHS doesn’t consider it a Top Safety Pick because of a 'Marginal' score (one step above the lowest grade) in the small overlap front crash test. "Measures from the dummy indicate that injuries to the left lower leg would be likely in a crash of this severity. Injuries to the left foot would be possible," IIHS' analysis said.

What importance do you place on crash results when buying a car? Do you find it interesting to see how a vehicle performs in an accident? Let us know in the comments below.