Our 10 favorite Jeep concepts of all time 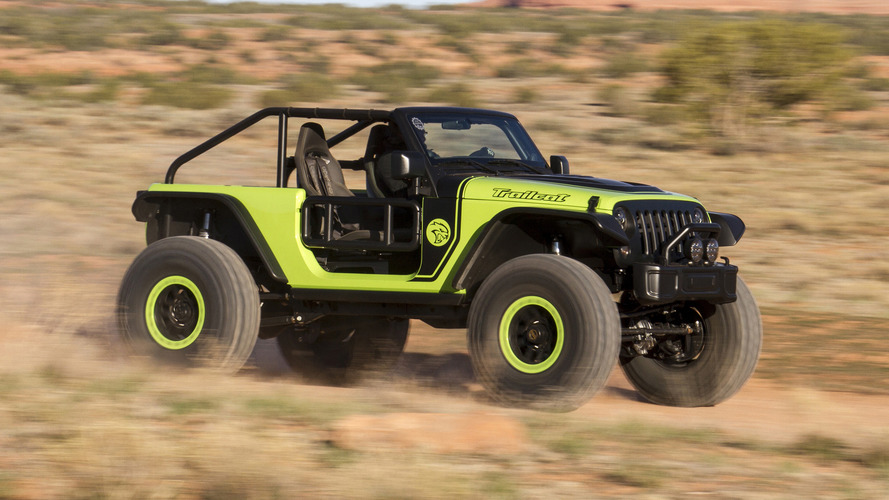 From sensible to unbelievable, these are the Jeeps we wish had been built.

Jeep engineers and designers are the enablers in chief when it comes to modifying the Wrangler, routinely showing wild concepts to pique enthusiasts’ interest, using the iconic rock crawler as a canvas. Sometimes Jeep’s concepts inform future models; other times, they’re just expressions of the brand’s creativity. Whether they connect with the real world or not, Jeep’s concepts are unfailingly cool. We sourced the archives to come up with a list of our 10 favorite ones of all time.

Yes, you can take the roof and doors off a Wrangler, but what if Jeep made a true convertible? That was the thinking behind the Freedom concept, which started life as a Cherokee but had its roof removed to let more air into the cabin. A giant cross brace served as both roll protection and to keep the body stiffer. As on a regular Cherokee, the concept had four-wheel drive; unlike a Cherokee, it also had a power-operated soft top. Cool as it may be, we’re not expecting Jeep to put a convertible like this into production any time soon – the Wrangler’s removable roof notwithstanding.

Today we pretty much take for granted that buyers who want more space and accessibility can get the four-door Wrangler Unlimited. In 1997, that wasn’t the case. The Dakar concept showed designers were at least experimenting with the idea, though, with a frame extended by almost 15 inches to provide an extra set of doors and much more space for rear passengers.

Other upgrades included a roof rack, sliding canvas sunroof, a winch, a shovel, and various extra lights. “Compared to our 1997 Jeep Wrangler, Dakar comes complete with twice as many doors and is prepared for twice the adventure,” John E. Herlitz, then Chrysler Corporation’s vice president of design, said ahead of the concept’s reveal at the ’97 Detroit Auto Show. The real four-door Wrangler Unlimited was introduced at the 2006 New York Auto Show and has been on sale ever since.

The Treo concept couldn’t be much farther from a traditional Jeep design. Inside, there’s a 2+1 seating arrangement with two seats up front and a lone one behind. The steering wheel, pedals, and other controls – which operate over a drive-by-wire interface – can slide from side to side so the car can easily be switched from left- to right-hand drive and vice versa. Two mountain bikes easily stow on the rear, and the Treo’s narrow form factor is intended for buyers who live in busy cities or on college campuses. Power came from two electric motors (one for each axle) with a hydrogen fuel-cell generating electricity.

Named for the Gladiator truck launched in 1962 on the basic architecture of the Jeep Wagoneer, this concept was a mouth-watering glimpse at what a factory-baked Wrangler pickup might look like. The unconventional bed featured a “midgate” design so its length could be extended from the standard 68 inches (1,727 millimeters) to 80 inches (2,032 mm) on demand. To sweeten the deal, a 2.8-liter turbodiesel engine was slipped into the engine bay, offering 163 horsepower (121 kilowatts) and a towing-ready 295 pound-feet (399 Newton-meters) of torque. Of course, this is no longer just fantasy. Thanks to spy photos and official confirmation from Fiat Chrysler Automobiles, we know that Jeep is planning to introduce a pickup truck body style with the next-gen Wrangler.

It’s got two 5.7-liter Hemi V8 engines, each cranking out 335 hp (249 kw) and 370 lb-ft (501 Nm) of torque. Yes, that’s a whopping 670 hp (499 kw) and 740 lb-ft (1,003 Nm) combined from this ludicrous Jeep concept. Other wild design elements include a special four-wheel steering apparatus, allowing for ultra-nimble turning or for a sideways crab-steering mode, both of which would be a boon in tight off-roading situations. And, thanks to its striking design, new suspension, and 37-inch tires, the Hurricane concept has a 64-degree approach angle and 86.7-degree departure angle, enormous figures that would allow the concept to tackle all sorts of insane terrain. It’s a great example of engineering insanity put to use, and a testament to the creativity of Jeep engineers and designers.

Though it doesn’t bear much resemblance to today’s Renegade subcompact crossover, this concept did portend a seriously unusual style for future Jeep models. It’s a two-seat convertible with cut-out doors and a durable interior that can easily be hosed out when dirty. With its low-materials design, keeping weight (just 3,150 pounds/1,428 kilograms) and materials usage to a minimum, Jeep described the concept as ideal for, “those who want to enjoy the earth while taking care of its future.”

Interestingly, it had a plug-in hybrid powertrain, combining a Mercedes-sourced Bluetec 1.5-liter inline-three diesel engine with a lithium-ion battery pack and motor. The Jeep could drive about 40 miles (64 kilometers) on battery power alone and had a combined efficiency rating of 110 miles per gallon.

This concept is also a throwback to a model from years past, in this case the 1956-1965 Forward Control. To resurrect that idea in the 21st century, Jeep engineers shoved the cab of a 2012 Wrangler Rubicon right over the front axle and installed a new drop-side cargo box out back. To massively improve ground clearance, the Mighty FC concept uses portal axles, which are available from the Jeep parts catalog; at the time this concept debuted, the front portal axles cost $12,500 and the rears were $11,000. The suspension uses new King coil-over assemblies, Teraflex control arms, and 17-inch beadlock wheels with 40-inch off-road tires. It is, in other words, a beast of a machine.

Designed as an homage to the 1970s-era Cherokee, this Jeep concept is based on a Wrangler, even if it barely resembles one anymore. New bodywork creates an expansive cargo area with fold-down tailgate, while steel bumpers and a retro-inspired grille take this Jeep back four decades. What really sells it, though, are the details: the carved-wood shifter, the Tiki toy atop the dash, the period-correct surf stickers throughout the interior. This is the Jeep I want to take for a long day at the beach.

The Shortcut pays homage to the classic Jeep CJ-5 and is covered in retro touches. The most significant change, of course, is that it has been shortened by 26 inches (660 mm). With shorter bumpers and no spare tire, the Shortcut’s approach and departure angles should be extreme. But it’s really about nostalgia for the 1950s, what with the red plaid upholstery, red-painted steel wheels, and old-school roll bar design. In a world of ever larger and more modern Jeep Wranglers, we appreciate that this concept doesn’t forget the brand’s past.

There are probably vehicles out there that wouldn’t be improved by the addition of a Hellcat engine – but the Jeep Wrangler isn’t one of them. The Jeep Trailcat concept is fully functional, with Dodge’s supercharged 6.2-liter V8 sending power through a six-speed manual transmission. Don’t expect to ever see this in a Jeep showroom, though we do know that a Hellcat-powered Grand Cherokee is on the way.

Gallery: Our 10 favorite Jeep concepts of all time